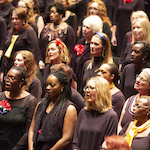 Vox Holloway is a community choir which is open to all. They sing a wide range of music, working with professional soloists and musicians. The director, Harvey Brough, is a composer and arranger whose original work for the choir includes Freedom Song. His deputy director is Christina Gill, a renowned operatic soloist, who has played a key role in devising and running their online choir, Virtual Vox. The choir has raised £80,000 for charity since 2010. Wills Morgan is a singer, director, writer, arranger and improviser. He has been a soloist for, amongst others, Kent Opera, Cleveland and Toledo Opera in Ohio and London’s National Theatre. Michael Henry is a vocalist, musical director and composer, who has worked with major British opera houses and European ensembles. Angela Caesar made her debut at Carnegie Hall, New York, as the first prize winner of the Centre for Contemporary Opera’s International Opera Competition. She has since performed in Europe, the West Indies, and across the UK. Justin Butcher, Vox Holloway founder, is a writer, actor & musician. In 2021, to mark Dante’s 700th anniversary, he produced Speaking Dante - a performance of the Divine Comedy with a cast led by Ralph Fiennes, Helen Mirren, Jessie Buckley & Adjoa Andoh, raising funds for refugee charity Comunità di Sant’Egidio.