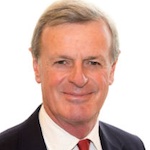 Richard Shirreff was commissioned into the British Army as a cavalry officer after reading history at Oxford. In his 37 years of service, he saw combat as a tank commander in the First Gulf War, experienced many of the complexities of Northern Ireland during his three tours there and learned first-hand the challenges of bringing peace to the Balkans in both Kosovo and Bosnia. He returned to Iraq as a multinational commander in 2006-7. His last seven years in uniform were spent in two senior NATO command posts: Commander of the Allied Rapid Reaction Corps and Deputy Supreme Allied Commander Europe; the Alliance’s deputy strategic commander and the most senior British general in the Alliance. Since leaving the Army he has set up Strategia Worldwide, a risk management consultancy.