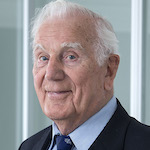 Now in his 99th year, in WWII Des Curtis flew as navigator in Beaufighters and Mosquitos of Coastal Command, RAF. He was awarded D.F.C. in May 1944 and appointed Chevalier of the Legion d’honneur 2017. After six years in an engineering factory, in 1953 he joined Mobil Oil in Nigeria. In 1963 he moved to the London office and was appointed Director in 1973. He retired in 1979 and was Managing Director of World Petroleum Congress held in London in 1983. Now retired in Wimborne, he has worked for several charities and is currently fundraising for Dorset & Somerset Air Ambulance and The Peoples Mosquito.