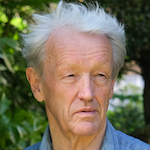 Colin Thubron is Britain’s most acclaimed travel writer as well as a novelist. His first books were about the Middle East - Damascus, Lebanon and Cyprus. In 1982 he travelled by car into the Soviet Union, a journey he described in Among the Russians. From these early experiences developed his classic travel books: Behind the Wall: A Journey through China (winner of the Hawthornden Prize and the Thomas Cook Travel Award), The Lost Heart of Asia, In Siberia (Prix Bouvier), Shadow of the Silk Road and To a Mountain in Tibet. Among other honours, Colin Thubron has received the Ness award of the Royal Geographical Society and the Livingstone Memorial Medal of the Royal Society for Asian Affairs. In 2007 he was made CBE. He was elected President of the Royal Society of Literature from 2010 to 2017, and named an RSL Companion of Literature in 2020.