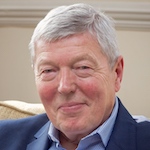 Alan Johnson is a British Labour Party politician who served as Home Secretary from June 2009 to May 2010. Before that he filled a wide variety of cabinet positions in both the Blair and Brown governments, including Health Secretary and Education Secretary. Until 20 January 2011 he was Shadow Chancellor of the Exchequer. Johnson was the Member of Parliament for Hull West and Hessle until his retirement from politics in 2017. His first book, This Boy, won the RSL Ondaatje Prize and the Orwell Prize in 2013. His second, Please Mister Postman, won the National Book Award for Autobiography of the Year in 2014. His third, The Long and Winding Road, was published in 2016 and won the Parliamentary Book Award for Best Memoir.